A Comprehensive Guide to Betting on the Australian Football League

If you enjoy watching tireless athletes, brutal tackles, jaw-dropping kicks, and phenomenal catches, you will instantly fall in love with the Australian Football League (AFL). It's considered the only professional Aussie rules competition for men in the world and is immensely popular when it comes to the international sports betting market. Over 1.25 million people across 10,000 clubs play AFL and it's also the most highly attended sports in the Land Down Under. What's even more impressive is that more than 500,000 people bet on AFL on any given year which is why we created a comprehensive guide that will cover everything from how the sport is played to the bet markets you'll find when you bet on AFL.

The sport was founded in 1896 and was originally known as the Victorian Football League before it changed its name in 1990 to the Australian Football League. The AFL comprises of 18 different teams that play against each other every single year from March until August. The best 8 teams then advance to the final series that concludes with the Championship game, known as the AFL Grand Final. The last game takes place at the Melbourne Cricket Ground on the last Saturday of September. Now that you know the basics, let's take a closer look at what the Australian Football League actually is, how you can bet on AFL, and the tips and tricks you can incorporate to greatly improve your odds when you bet on AFL.

What is the Australian Football League?

The Australian Football League, also referred to as Aussie Rules or Footy in the Land Down Under, is played across an oval pitch that is larger than a regular football field. You won't find the standard dimensions for an oval pitch as one will differ from the next. However, to give you some perspective, the largest oval pitch (UTAS Stadium) measures at 145 meters wide and 175 meters long, while the smallest oval field (Blundstone Arena) measures at 124 meters wide and 160 meters long.

Players can score points by kicking the ball through the 4 posts that are situated on either end of the oval field. The two center and taller posts are known as goal posts, while the two outer and smaller posts are known as behind posts. When a player kicks the ball through the center goal posts, it's worth 6 points. When a player kicks the ball between one of the behind posts and one of the goal posts, it's worth 1 point.

Every Australian Football League team consists of 18 players on the oval field along with an additional 4 players as interchangeable substitutions on the bench. There are no restrictions on the number of times a single player can be substituted. However, every team will have a limit of 90 interchanges for each game. Therefore, when you bet on AFL, you can expect to see loads of substitutions. 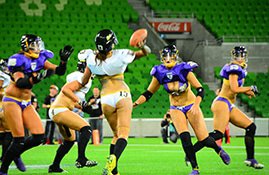 When a player manages to catch the ball from a kick that has traveled a minimum of 15 meters without touching another player or the ground, it's referred to as a "mark". When this occurs, the player that caught the ball will be given a protected area of 10 meters that can be used for a free-kick. Grabbing a "mark" in mid-air is considered one of the most vital skills when it comes to the Australian Football League. You will notice when you bet on AFL that defenders are not allowed to tackle players while they are in the air. However, the player that is making a play for the ball can use opponents to jump off. It's also worth mentioning that defenders are allowed to tackle the player that is playing the ball but the tackle needs to be below the shoulder line and above the knees. Players that make tackles don't have to wrap their arms around the player with the ball which means body checks and shoulder charges are allowed in the game. Players are just not allowed to push players in the back.

How to Bet on AFL

Before you can bet on AFL, you will need to learn and understand the wide variety of betting options that will be at your disposal to use with bonuses. Once you understand the different bet types, you'll be far more comfortable and confident to bet on AFL on either your desktop or mobile device at some of the best sportsbooks the internet has to offer. Once you've registered an account, you can use any of the following bet types to successfully bet on AFL.

Head to head betting is the same as Moneyline betting when it comes to the Australian Football League. When you place a bet on AFL with head to head, you are essentially betting on the team you predict will win the match. The team deemed the favorite to win the match will be presented with a negative sign (-), while the team deemed as the underdog will be presented with a positive sign (+).

Line betting is the same as point spread or handicap betting in the Australian Football League. When you bet on AFL using line betting, you will notice that an underdog will receive points while the favorite will give away points in an attempt to even the playing field. For instance, let's say the line has been set to -19.5 in favor of the Sydney Swans. If you bet on AFL at -19.5 on the Sydney Swans, the team is required to win the match by at least 20 points for you to win your bet. If you bet on AFL at +19.5 on the Brisbane Lions, the team is required to either win the match or lose the match by less than 20 points.

For instance, the sportsbook set the total at 130 for the match between the Sydney Swans and the Brisbane Lions. The score total at the end of the match looks like this: Brisbane Lions 5.4 (34) vs Sydney Swans 13.8 (86). The first number will indicate the number of goals scored, while the second number indicates the number of behinds scored. The final number is the total points scored by each time. When you add this together, you will have a total of 120 which is Under from what the sportsbook posted. This is vital to understand before you bet on AFL games.

Margin betting is an immensely popular market when you bet on AFL because it will allow you to select how much your team will win by. For instance, let's say the Sydney Swans is listed at +100 with a winning margin of 1-39. This provides far more value when you bet on AFL as opposed to the -300 head to head betting market for the team to win the match. However, if the Sydney Swans win by more than 39 points, your bet will not be successful. Most games in the Australian Football League will have margins ranging from 1-39 and 40+. You can also find 1-24 or 24+.

Derivatives betting is basically total, line, and side bets that will occur on a quarter of half as opposed to the full match. This is fantastic markets when you bet on AFL, especially when you are looking for early action in a match. When you use derivatives when you bet on AFL, you can also be quite profitable after doing some research into which teams tend to play better or worse during the early stages of the game.

Apart from derivatives betting, you will also come across an assortment of proposition bets when you bet on AFL. This can include player props, the number of behinds scored, the number of goals scored, the first player to score in the game, the first team to score, etc. You can use no deposit bonus codes to make bets like these for free.

Future betting in the Australian Football League will allow you to place bets on future results. For instance, one of the most popular futures you can use while you bet on AFL is the team that will win the AFL Grand Final match. Futures will usually be posted before the tournaments get underway and will have some attractive odds as well to make it worth your while.

Tips and Tricks to Increase Your Chances of Winning

Now that you know and understand that different markets you can use when you bet on AFL, it's time to look at a few tips and tricks you can incorporate with your bets to greatly increase your chances of winning.

Before you place a bet on AFL, it's highly recommended that you do your own research. You will need to dig deeper than just simply looking at the win-loss record for both teams or where the two teams are situated on the leaderboard. There are loads of other factors to consider when you do your own research, including head to head history, recent form, success on the road, success on home soil, etc. Fortunately, the Australian Football League is an immensely popular sport with tons of data online, giving you everything you need at your fingertips before you decide to make a bet on AFL.

Just like all outside sports, the weather plays a significant role when it comes to the Australian Football League and your bet on AFL. Wet conditions make it more difficult for players to pass the ball and handle the ball, while rain and wind will have a huge impact on accurately kicking the ball through the posts. If you plan to bet on AFL using margin betting or total betting, we highly recommend that you monitor the weather conditions first.

There are tons of advantages when you are the home team in the Australian Football League. For instance, there is no need to travel, the crowd is there to support you, and you are more comfortable playing on home soil. The same cannot be said for the team that needs to travel, making it an important option to consider before you bet on AFL.

Australia is an enormous country and the cities with the biggest population are spread out quite a bit. Nine of the 18 teams in the Australian Football League are situated in Melbourne and its surrounding suburbs. For these teams, there is no problem to play each other and when you bet on AFL, there is also no need to look at travel times. However, Queensland and Melbourne are 1,000 miles apart and West Coast and Fremantle are more than 2,100 miles from Melbourne. This will have a huge effect on the players and is, therefore, something to seriously consider when you bet on AFL.

The final tip we can give you to improve your chances of winning when you bet on AFL is to look for the best players on the field. You might find a total of 36 players at any given time but the most influential players still find a way to make a serious impact that can completely change the outcome of the game.

We would also advise you to keep track of injuries as players in the Australian Football League tend to get hurt or injured quite often due to tackles. Before you bet on AFL, look for players that are at full strength and those that are a bit banged up. You can then compare the two teams in this way as well to make a more informed decision when it comes to a bet on AFL games.

Now that you have everything you need to confidently bet on AFL, it's time to head to your favorite online sportsbook and place a wager. Don't forget to monitor the best teams and players in the Australian Football League before placing a bet on AFL and do some research into attractive welcome packages to further enhance your betting experience on either your desktop or mobile device.